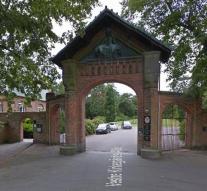 copenhagen - A Danish boy of two was killed when a tombstone fell on him at a cemetery in Copenhagen. The toddler was playing hide and seek with his parents last Wednesday when the tragic accident occurred.

The 23-year-old mother and 24-year-old father of the boy called the emergency number, but the emergency services were unable to save the child. Kenneth Jensen, chief of police in Copenhagen, says it is unclear whether the boy died on the spot, and he died later in hospital. 'It's terrible. We will find out how this could happen. '