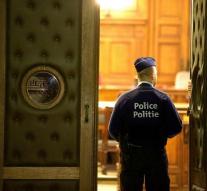 brussels - Members of the rolled terrorist cell in Belgium Verviers in January 2015 given prison sentences of thirty months to sixteen years. The court in Brussels ruled on Tuesday that the suspects wanted to commit an attack in Belgium, most likely at Brussels Airport in Zaventem.

According to the court, the cell via intermediary Abdelhamid Abaaoud continuous contact with IS in Syria. Abaaoud is considered one of the protagonists of the attacks in Paris in November 2015. He escaped but was found several days later and shot in a suburb of Paris.

Many people in the lawsuit over the planned attack in Zaventem.


the terror cell had much contact with Abdelhamid Abaaoud (in photo).

In a rented house in Athens is a mobile phone found were listed with sketches of an arrivals hall and a man with a luggage trolley, with 'bomb' and 'Zaventem' by Abaaoud.

On March 22 this year, still found a terrorist attack at Zaventem place.