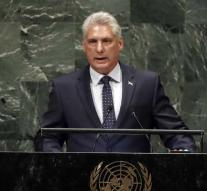 havana - The president of Cuba can now be followed on Twitter. Miguel Díaz-Canel sent a tweet on Wednesday, the first president of the communist country, followed by another two hours later.

Díaz-Canel placed a photo on which the beginning of the independence struggle of the island is commemorated. Then he thanked for all the support. The Cuban president has more than 5000 followers four hours after his first tweet. In his account he writes that is committed to the ideas of Fidel and Raúl Castro.

Díaz-Canel, who succeeded Raúl as president this year, wants Cuba to develop technologically. No mobile internet is available in the country. By the end of the year, the government wants to have rolled out a 3G network.