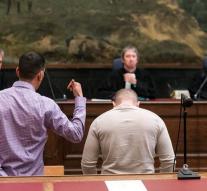 brussels - In the lawsuit surrounding the terrorist cell that was early last year rolled required by the Belgian Verviers Thursday hefty prison sentences. Against four prominent members who would like to carry out attacks in Belgium demanded the federal prosecutor prison sentences of 18, 16 and twice 15 years.

Police killed in January 2015 during the raid in Verviers, near Liege, two suspects. Two others escaped, among them the then eighteen-year-old Dutchman Zaid Koulliss. He may be in Syria. Against him claimed the OM five years in prison.

Sixteen suspects be prosecuted, of whom seven are present in the process. Against most were demanded prison terms of five or ten years.


The leader of the network would be in the terror attacks Adel Hamid Abaaoud have been, who was involved in Paris in November and shortly after was shot dead by French police.

If the court ruling is not yet known.