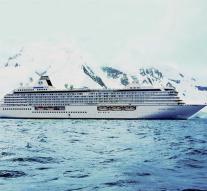 - Nautical Experts warn of a second Titanic disaster now huge luxury cruise ships are increasingly venture into the Arctic Ocean. Last summer crossed the luxury ship Crystal Serenity for the first time the dreaded Northwest Passage. In case of emergency there are no harbors and emergency personnel are thousands of kilometers away from a possible crash site, say the experts.

More than 1700 passengers paid in August at least 20 000 euros for a month-long voyage from Anchorage (Alaska) to New York. It is expected that several cruise companies step into the icy waters will take the next few years.

Due to climate change, the sea is mostly ice-free in summer. Yet critics fear enormous problems when things go wrong. 'The Northwest Passage is composed of thousands of kilometers with nothing,' said Tero Vauraste, boss of the Finnish scheepvaarder Arctia.

Between Alaska and Greenland are- unlike other remote places in the oceans- no safe havens in the form of ports, he warns. 'Navigation in this sea is complicated by the poor quality of the satellite. A iceberg moves received with a certain speed, but ships always images that are at least 10 hours old. '

A disaster would not only require a lot of casualties, but the vast oil reserves aboard also very damaging to the environment. 'An accident with a cruise ship in this area would be an unprecedented environmental disaster,' said Daniel Skjeldam boss shipping company Hurtigruten. Most cruise ships use a 'heavy' kind of diesel, which is almost impossible to clean up. 'Strict regulation is therefore needed'

According to the company of the Crystal Serenity are ijscruises completely safe. As momentum a great ice breaker for the ship and the captain disposal ijsradars. There are also two evacuation helicopters aboard.