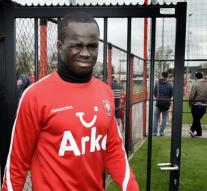 - Cheick Tioté died on Monday at the age of thirty. The midfielder broke down during the afternoon training of the Chinese Beijing Enterprise. He died later in the hospital, confirming his case lawyer Emanuele Palladino to Squawka News. There is nothing known about the cause of his death.

The Ivoryan played a renter for Roda JC in the 2007/2008 season, borrowed from Anderlecht at that time. The season he signed up with FC Twente, the club with which he became a champion in 2010. In the summer of that year, the African moved to Newcastle United, where Tim Krul was also contracted. \u0026 Nbsp; In February this year he made the switch from England \u0026 nbsp; to China.

The 30-year-old player is not the first football player to succumb to the unexpected field. Marc-Vivien Foé was one of the most famous. He collapsed in 2003 during the semi-finals of the tournament to enter the Confederation Cup between his country Cameroon and Colombia, and died shortly later due to a heart failure. \u0026 Nbsp; Tioté came \u0026 nbsp; 55 times for Côte d'Ivoire. In those duels he scored once. In 2015 he won the Africa Cup with the national team.