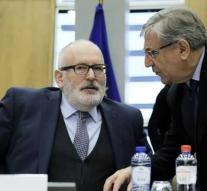 brussels - The European Commission is concerned about the independence of the judiciary and the fight against corruption in Romania. Chairman Juncker and his right-hand man Frans Timmermans therefore call the parliament in Bucharest to reconsider on its course.

Parliament last month agreed with measures that would undermine the rule of law. Further relapse threatens, reason for the daily EU administration to 'thoroughly' review changes in the (criminal) law that have consequences for the fight against corruption and conflicts of interest.

Romania has been under special supervision since joining the EU in 2007 and receives recommendations from Brussels every year. Nothing has been done with the last report of November, the committee notes. Last year, tens of thousands of Romanians argued against plans by the government to ease criminal law against corruption.

The European Commission has previously opened proceedings against Poland and Hungary because of problems with the rule of law in those countries.