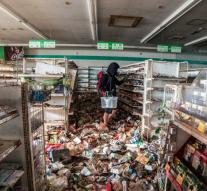 - More than five years after the nuclear disaster in Fukushima, we get a glimpse into the deserted area around the nuclear power plant with a Malaysian daredevil. About 200,000 people were in a hurry to leave the area in connection with the release of hazardous radiation.

The Malaysian photographer Keow Wee Loong urged the enclosed area within using a GPS device and Google Maps and scored to get into the 'red zone.' He found the ghost towns of Okuma, Futaba and Namie in which long nobody had been five years.


On Facebook, he describes what it was like to walk around in the dangerous place. 'I have a burning sensation in my eyes and there is a heavy chemical smell in the light. I crept through the woods to evade the police on the roads and it was great! '

In a series of photos he shows include abandoned supermarkets, bookstores, video rental, laundry and a train station. Everything looks like everyone is left in a hurry, leaving everything as it was. Calendars and journals show the date of the accident: March 2011. As if time has stood still.


Remarkably, the stores are not looted after that time and there are still a lot of stuff untouched. Everything is exactly where it was when the earthquake. The residents left then came the tsunami warning. A few hours later there was an explosion at the nuclear plant and leaked radiation.

'The radiation level is still very high in the red zone,' writes the photographer. 'Not many people have been in this town in the last five years. If it has disappeared. I took food, money, gold laptop and other valuables. '

Keow Wee Loong calls his followers to share his pictures in order to draw attention to the dangers of et use of nuclear energy.

For more pictures on the Facebookpaginavan the Keow Wee Loong.