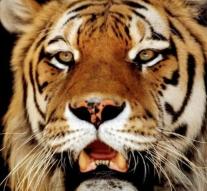 - In a safari park in the Chinese capital Beijing, a woman slain by a tiger. A second woman was injured. In the park, where visitors with their own car between wild animals can ride, the women stepped out of the car.

Which reports news China News. When one of the women got out of the car because of a disagreement, the tiger lunged. The other woman got out to protect her fellow passenger, was also attacked. The latter had to pay for the attack with death. The other passengers, a man and a child, were not injured.

Visitors to Badaling Wildlife Park is strictly asked not out of the car to move. Authorities in Yanqing district where the park is located allows investigate the cause of the incident. The park is in charge of the investigation and to ensure the safety of other visitors immediately closed.