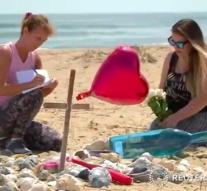 kitty hawk - A 4-year-old boy, who was walking along the tide line with his mother, was dragged into the sea by a sudden huge wave.

Despite a huge search operation in North Carolina, he is still missing.

The boy walked on Kitty Hawk's beach in very shallow water when the tidal wave suddenly came over him. The mother had to let go by the blow. A Coast Guard spokesperson said in the Washington Post that she saw him being pulled into the sea and that she could not do anything.

Mother and son were visiting family in the neighborhood and thought they could make a nice beach walk with the nice weather.

According to the newspaper, there were local waves up to 1.80 meters high, something that is normal in that area.

A spokesperson for the police said that the boy was the only child of the family.