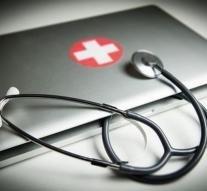 - The data of people who have sought information and advice about their health on the website thuisarts.nl has inadvertently been collected by so-called tracking cookies and shared with others. That made Dutch College of General Practitioners (NHG), the organization behind the site on Tuesday.

The website, created by doctors, was launched in 2011. But when building them were not sufficiently taken that were placed tracking cookies. NHG in September already received a warning that sensitive information was shared with third parties. Only a month later, measures were taken at a subsequent notification.

According to NHG is the software that cookies placed since been removed. Measures have also been taken to prevent recurrence. How many people data collected is unknown. At NHG was no one available to comment Tuesday.

Tracking cookies are small files placed on computers of Internet users to identify a user on one or more websites. Information is gathered about the user, such as which IP address is being used, but also which pages the user clicks on.