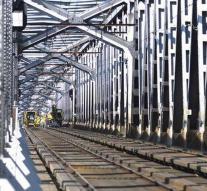 utrecht - ProRail will renew the railway construction of the Moerdijk bridge. The important north-south connection on the Dutch deep goes from Tuesday until August 11th. Train passengers between Dordrecht and Breda are transported by coach during that period.

It's a complex job because it needs to be completed in a relatively short time, Network Administrator ProRail says about the work. First of all, removing the old rails will begin. That's a tough job because the track is poured and stuck with a kind of glue.

The new rails are 120 meters longer than the old ones. 'We use that to connect as few rails as possible. These connections are weak points that increase the likelihood of malfunctions, 'explains ProRail. At the same time, at Lage Zwaluwe, a large part of the tracks, including ballast and sleepers, will be replaced.

The track on the bridge was also replaced in 2003. Between 2014 and 2015, construction was a major place, but it did not work well. There were hair crazes. Last year, therefore, emergency repairs had to place a lot of obstacles to passengers and freight transport. Daily 75. 000 train passengers cross the bridge and pass on average 75 freight trains.

There are three Moerdijk bridges over the Dutch Diep: the road traffic bridge (from 1978), the railroad (1955) and the railroad for high-speed trains (2005). The first railway bridge dates back to 1872 and was largely destroyed by the Germans in the Second World War. The HSL burg will only be open for intercity between Rotterdam and Breda in the coming weeks.