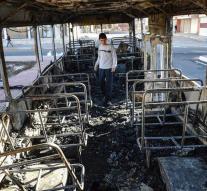 diyarbakir - Three Turkish officers have been killed after a bomb exploded in their car in southeast Turkey. Security officers have it said Tuesday.

The bomb in the car is likely to be detonated by remote control when the officers drove on the road between the cities of Diyarbakir and Silvan.In that region has recently escalated violence between security forces and Kurdish militants.
NEW