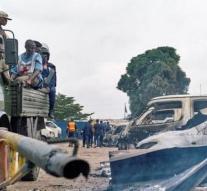 kinshasa - Not tens of thousands, but thousands of prisoners escaped from the main prison in Congo on Wednesday. The local authorities spoke immediately after the outbreak of fifty prisoners, but according to eyewitnesses, more than 3,000 escaped, according to the BBC. The detainees could flee the complex when armed men entered prison.

The attackers wanted to release Ne Muanda Nsemi, the leader of a kind of sect from the west of the country and leader of a political party. Muanda Nsemi was arrested in March after a series of violent clashes between his followers and security forces.