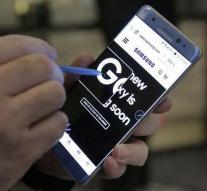 - Not one but have caught fire three replacement handsets from Samsung. Now seems to last Tuesday a handset from Samsung burned in Nicholasville, in the US state of Kentucky. The owner of the phone woke up in a room full of smoke. It reports the local news business WKYT.

Thursday summed up a replacement Galaxy Note 7 fire aboard an aircraft from Southwest Airlines. Friday began to smolder same type device in the hands of a 13-year-old girl in Minnesota, reported KSTP-TV. With the unveiling of the incident in Kentucky there are three replacement Samsung phones are known to exhibit just like the original defects.

In the previous failure with the battery of several people worldwide smartphone were injured. The replacement of the previous version of the Samsung devices already delivered significant cost and image damage.