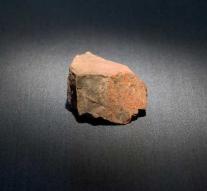 new york - The presumably only moonstones in private hands have raised 885,000 dollars at an auction in New York, about three quarters of a million euros. Anyone who bought the three special 'pebbles' did not want to tell Sotheby's. The auction house had expected this price approximately.

The miniscule pebbles came to earth in September 1970 thanks to the unmanned Soviet mission Luna-16. They were gifted to Nina Koroleva, the widow of Sergei Korolev (1906-1966), in a metal box with magnifying glass. He was one of the founders of the space program of the then Soviet Union. An American collector took over the moonstones at a public sale in 1993.

According to Sotheby's, all other known moonstones on earth are in the possession of governments.