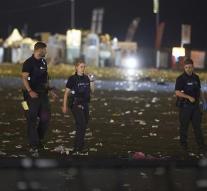 nurburg - Three people were arrested in connection with the alleged terrorist threat at the German rock festival Rock am Ring. They are part of a salafic movement in the state of Hesse in central Germany, police said Saturday

It is not known if the three people are still suspicious. Certainly one of them had a staff card for access to the festival site.

The three-day festival started Friday at the race circuit at Nürburg in the Eifel. The event was interrupted on Friday night because of terrorist threats. The site has been searched, but nothing has been found, police reported. The festival is resumed on Saturday at 13.30 and continues Sunday.