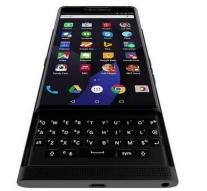 waterloo - BlackBerry is working on three new Android phones. The first is already expected in July or August. That reports VentureBeat.

BlackBerry takes the step, despite reported disappointing sales results from its first Android Smartphone. The devices have been given the code name Neon, Argon and Mercury.

The first to the Neon would be true. This phone is designed for both the business and consumer markets. Which reportedly has a 5. 2-inch full touch screen, with no physical keyboard, with HD resolution. The device has an aluminum frame and a plastic back and is equipped with a Snapdragon 617 system-on-a-chip from Qualcomm.

The phone would include 3GB RAM, 16GB of storage and a 2610mAh battery, which QuickCharge 2. 0 is supported. The unit receives cameras 13 (rear) and 8 (front) megapixels.

After the Neon is the Argon's turn, which should come out sometime in October. Also this smartphone has a full touch screen, this 5. 5 inches. The screen would have a qHD resolution, as Priv, the first Android phone from BlackBerry. This unit will get a Snapdragon 820 SoC from Qualcomm, 4GB of RAM and a storage capacity of 32 GB.

In addition, the Argon has a 3000mAh battery, supported by a Quick Charge 3. 0. Further, a fingerprint scanner to sit and cameras 21 (rear) and 8 (front) megapixels. The Argon is designed for the business market, but also enthusiastic consumers.

In the first quarter of 2017, the Mercury expected, the only one of the three that will be equipped with a physical QWERTY keyboard. This unit has a 4. 5 inch screen with full HD resolution. The entire Enclosure class is of aluminum. Mercury has a Qualcomm Snapdragon 625, 3GB of RAM and 32GB of storage, cameras of 18 and 8 megapixels and a 3400mAh battery.