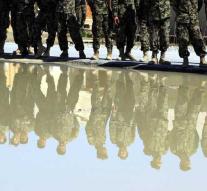 kabul - Three NATO soldiers were killed in a suicide attack in the province of Parwan in eastern Afghanistan on Sunday. NATO has informed that. No announcements were made about the nationality of the victims.

Two Afghan and one American military were also wounded by the attack in Charikan, the capital of Parwan. According to the Afghan authorities, NATO soldiers were on patrol.

The Taliban claimed responsibility for the attack in a statement.