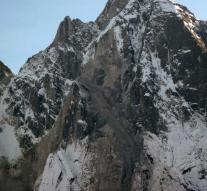 also - Three mountain climbers were killed on the Piz Bernina mountain in the Swiss Graubünden on Thursday, Swiss media reported Friday. The group fell down to a height of 3600 meters 300 meters down. Other climbers witnessed the fall and alerted the rescue services.

Due to falling stones in the place of the accident it was not possible to store the three thursday. That was only a Friday with a helicopter. The exact cause of the accident is unclear. The nationality of the victims is not yet known.

Last Wednesday a 32-year-old Alpine champion from Germany broke on the Piz Bernina.