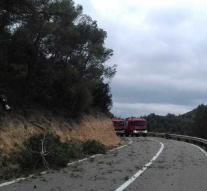 barcelona - Due to the crash of a light aircraft in the north of Spain, three people were killed. The authorities have announced this on Saturday. The identity of the victims has not yet been officially established.

The aircraft had taken off in the Portuguese town of Cascais and was on its way to the international airport of Reus, in northeastern Spain, not far from Tarragona. Not long before the planned landing, the unknown cause went wrong.