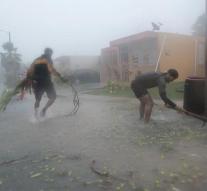 san juan - On the island of Puerto Rico three people were killed by Hurricane Irma. That states Governor Ricard Rossello of the American island in the eastern part of the Caribbean.

Among the victims is a bedridden 79 year old woman who was taken to a shelter. The other two victims were a woman who was electrocuted in her house and a man who got an accident during the storm.