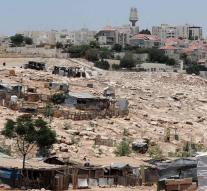 jerusalem - A Palestinian shooter killed three Israelis at a Jewish settlement on the West Bank. A fourth person was injured, Israeli media reported.

The Israeli military radio station interviewed a resident of Har Adar. He told the perpetrator to enter the settlement with a group of Palestinian workers. Then he opened the fire to Israeli agents.

The border police confirmed against the Jerusalem Post newspaper that the shooter appeared as a worker. He would have been stopped at the gate. Thereupon there was a change of shot, where the perpetrator also came to life.