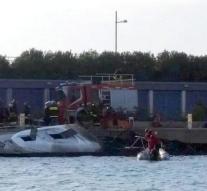 loano - Three Germans were killed in that fire broke out on the yacht on which they were sitting in the harbor of the Italian Loano. A fourth occupant could jump into the water in time from the vessel.

The incident in the city in northwest Italy was early Thursday morning. The victims were two men and a woman. According to German media barred fire their way out and they could not get away. The cause of the fire is not known.