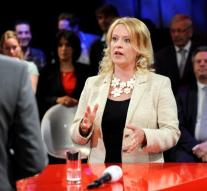 brussels - The inquiry of the European Parliament to Panama Papers are three Dutch. The parliament approved Thursday in Brussels, the composition of the 65-headed commission well.

Through the Panama Papers came out in April, companies and wealthy people have circumvented through the Panamanian legal consultancy Mossack Fonseca tax. Parliament wants to know whether the European Commission and the EU countries have done enough to enforce European laws against money laundering and tax evasion and avoidance.


The role of banks and financial services companies viewed the coming year. The hearings begin after the summer.