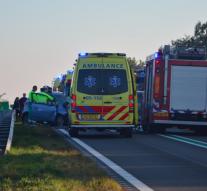 - By a collision between two cars in Vriezenveen (Overijssel) are three dead and one seriously wounded cases. The accident was Sunday afternoon at half past five place on the N36.

In a car sat a woman of 71 and a man of 70 from Schuinesloot (municipality of Hardenberg), both of whom were killed. In the other car were a man of 60 and a woman of 56 in Appelscha (Friesland). This man did not survive the collision. The woman was seriously injured.

Police are investigating how it could happen that drove one of the cars on the wrong side. By whom the car was driven a police spokeswoman could not say.

One of the cars had landed on the wrong side of the road. Police are investigating how this could have happened. Parts of the N36 are- also the piece in Vriezenveen- Chronicle as dangerous. Some also call the provincial road a 'death trap'.