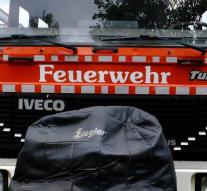 - In a fire three people died Wednesday morning in an apartment near the main train station and ten people injured. According to police, two adults and a child in the flames around.

Of the ten, four were injured to a hospital. Firefighters have been several hours trying to fight the fire in the six-storey building. The cause of the fire is still unclear.