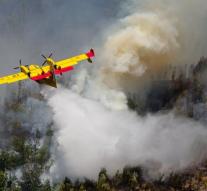 lisbon - In Portugal, the government announced three days of national mourning for the enormous disaster the country has suffered. In the meantime, the number of deaths of forest fires is already at 62. There are 150 people homeless, and 150 people evacuated, says mayor of Pedrógrão Grande Valdemar Alves.

Meanwhile, two out of four firepiles begin to weaken, by the extinguishing work, the Interior Minister said. While extinguishing services work out of all power to master the fire on all fronts, the first stories of people who died are known. Like that of the boy Rodrigo Rosário, four years old, who was on holiday with his uncle Sidel Belchior, 37 in the area. His parents were honeymooned to Cape Verde, so the two were pulled together. When the fire in Pedrógão Grande flooded them last afternoon, they tried to flee. The car was dusted by a burning tree. They could escape from there and climb into someone else's car- but together with the driver they got into the flame sea at Nogueirinho. There were certainly eight other dead. A mother mourns her three children, five and six years old.

Pictures of the road N-236-1 show many burned cars, where people stuck while trying to flee.

In the village of Mo Pequena, a four-year-old girl died in the flames sea, trying to flee with her grandmother. In that village, a 82-year-old woman has also gone up in the flames. Her neighbors tell JN's newspaper how they tried to take the woman on the run, but the woman wanted to stay in her house, and was consumed by the fire. In Sarzedas de São Pedro, a group of seven a tried to flee eight people, but they were caught by the flames, thus

A textile company, based in Sarzedas, which employs about 100 people, was partially destroyed. At the Avelarense sports club in Avelar, many people are looking for information about missing relatives after fire.

The national football league who is playing against Mexico tonight, plays with black smoke. Portugal has asked FIFA for a minute's silence for the victims of the disaster.