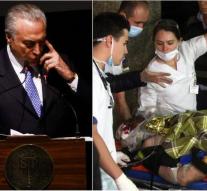 - Brazilian President Michel Temer has expressed its sympathy to the victims of the plane crash in which many members of the Brazilian top football team were killed.

'I want to express my sympathy at this difficult time. This tragedy has dozens of Brazilian families deeply touched, 'Temer said in a statement. 'The government will work to alleviate some of the pain for the relatives. '

After the crash are certainly counted 76 dead. Five passengers, of whom three players survived the tragic accident in Colombia. They are drained badly injured. On board were 72 passengers and nine crew members.