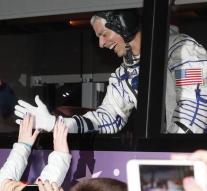 The three astronauts arrived at the space station at 5.55 pm, where they stayed for five months. Misurkin, Vande Hei and Acaba joined NASA astronaut Randy Bresnik, Rus Sergey Rjasanski and ESA Italian Paolo Nespoli who stayed in the ISS since the end of July.