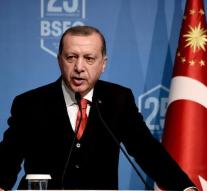 ankara - When the German soldiers are withdrawn from the Incirlik air force in Turkey, the Turkish government says 'goodbye.' The departure of troops would be no big problem for Turkey, 'Turkish President Recep Tayyip Erdogan said in Ankara.

Berlin suggested to transfer the approximately 250 German military personnel from the air base to another location in the region, such as Jordan. The reason is a conflict with the Turkish government, which refuses to allow German parliamentarians to visit their own troops.

Ankara was shot in the wrong throat that Germany has granted asylum to Turkish soldiers. Turkish Minister Mevlüt Çavusoglu (Foreign Affairs) said last week that his government does not intend to 'bend' the Germans to stay. 'If they want to leave, they are free to go. '