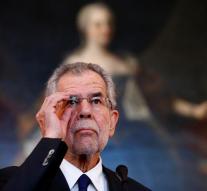 - Police in Austria have arrested a man who presidential candidate Alexander Van der Bellen and Premier Christian Kern with death would have been threatened. The man confessed Thursday guilty according to police.

The man uttered the bedreigingenvia Twitter and, according to the police ' psychologically unstable '. His computer and mobile phone were confiscated.

Wednesday it was announced that Van der Bellen receives police surveillance in connection with death threats from neo-Nazi circles. A man with a tattoo of a swastika on his chest announced via Twitter to Van Der Calling it will shoot. Another published a manipulated picture of the presidential candidate with a body in which blades are inserted. Or Thursday arrested man is also a neo-Nazi, the police did not.