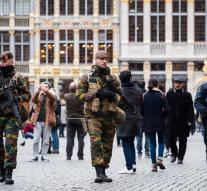 The Belgian Coordination Unit for Threat Analysis (OCAD) board to take the people in the night from Friday to Saturday to security measures. They have to places where many people gather, such as concerts, stations, airports and avoid crowded shopping. The population should respect security and spread rumors, but only information from governments and police.

OCAD raised the threat level in Belgium last week already two to three because of the attacks in Paris. The reason then was that Abdeslam Salah, one of the suspects of the attacks, is still a fugitive. Why the level now at the highest level of alert is scaled up, was not disclosed. The Belgian government will give according to the crisis center Saturday more information.

A spokesman for the crisis center says it's unclear how long level four will be in force. According to him, the situation is monitored permanently. OCAD determines the level of preparedness of the security forces. It is the equivalent of the Dutch National Coordinator for Terrorism and Security.

In Brussels ahead are more officers and soldiers deployed. The safety measure applies to the evening and night.

Although not the first time in Brussels the terror threat has been raised to level four, it comes according to Belgian media uncommon. The last time was in May 2014 after an attack was perpetrated on the Jewish Museum. Before that was level four set around old and new in 2007, because of plans to free the convicted terrorist and former professional footballer Nizar Trabelsi from prison.