Home / World / 'Threat IS at US air bases in South Korea 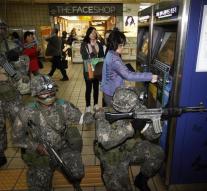 seoul - IS would have collected information on 77 US and NATO air bases around the world and would have called on supporters to attack it. So say the South Korean inform NIS services.

The terror group has also released information about individuals from 21 countries who work at security forces, including a South Korean who works at a welfare organization. That reports CNN. That person is now placed under protection, said the NIS. Cyber ​​Caliphate, the hacker collective of IS, has collected information about US military bases in South Korea, including Osan Air Base, different addresses and satellite maps of Google. This information would be disseminated within IS.

In a statement on Monday saying the US forces in South Korea (USFK), to take seriously the security at the bases. 'By constantly remain vigilant and exercise regularly with our South Korean partners, we remain able to respond to sudden threats.


Past five years, 50 people suspected of participating in terrorist organizations and were deported from South Korea, reports NIS. South Korean intelligence service warns that 'terror against South Korean citizens and foreigners in this country (South Korea ed.) Is real.'