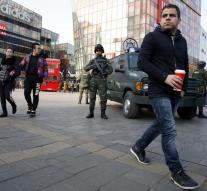 - The British and US embassies in China say they have information about a possible threat against westerners in China around Christmas.

Both embassies have sent warnings to their citizens. The threat would apply to a popular shopping district in the Chinese capital.

In August, in the shopping district a woman slain by a man with a sword. A man was injured.