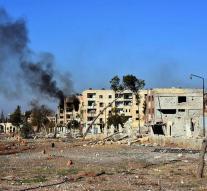 damascus - Thousands of citizens have the rebel-controlled area of ​​Aleppo since leaving government forces have recaptured several districts. The Syrian Observatory for Human Rights speaks of 10,000 people who have fled to the west and north of the city.

The now two-week assault accompanied by sustained air strikes and heavy artillery fire on positions of rebels. The army is trying to divide the rebel territory in two. According to the Observatory are thereby killed at least 225 civilians.

The figures are somewhat different. Syrian state media holding, according to the BBC in 1500 and Russia in 2500 speaks of citizens who have left eastern Aleppo.