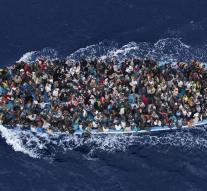 rome - About 3200 boat people were rescued Tuesday from overcrowded boats to the coast of Libya. Smugglers would have seized upon the weather and the quiet sea to send certain 26 vessels to Italy, said a spokesman for the Italian Coast Guard.

Ships from several countries took part in the rescue operation. As three Italian navy ships brought together some 1,000 refugees in safety. Also ships from Britain, Spain and Ireland shots to help the migrants. According to the Coast Guard has recovered so far one body.