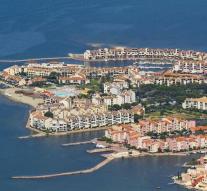 - Three thousand holidaymakers were evacuated Wednesday because of forest fires in the south of France. Strong winds fanned a fire at Le Barcarès, on the Mediterranean, according to the French Ministry of the Interior.

The fire is now under control, but the fire has caused a lot of damage. For example, at four different campsites destroyed about thirty tents and bungalows. Also, two firefighters were injured. According to the regional newspaper L'Independent burning underbrush would be the cause of the forest fire.

Another fire destroyed more than 120 hectares of pine forest between Beziers and Carcassonne. Six fire-fighting planes had to try to extinguish the fire. A total of four hundred firefighters were working to extinguish both fires.


Not only holidaymakers were given Wednesday to the strong winds and forest fires, including the Tour de France was also affected. So took the strong wind in the first kilometers of the eleventh stage between Carcassonne and Montpellier for the necessary falls. Several riders were blown down. Due to the expected strong wind has changed the route of the twelfth stage. The riders Thursday not drive to the summit of Mont Ventoux, passing through the barren landscape and the wind is too dangerous.

In other parts of Europe, raging wildfires. Therefore were Tuesday in the extreme south of Spain, near Gibraltar, evacuated hundreds of tourists. 545 people were taken to a safe shelter.