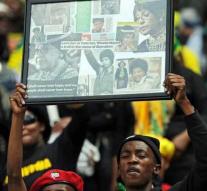 johannesburg - Thousands of South Africans commemorated Winnie Madikizela-Mandela during a mourning ceremony in Johannesburg. Relatives, politicians, activists and fans proved their last honors with speeches and singing and praised her decades of struggle against the apartheid system.

'Your courage in the face of death, with a constant threat of arrest, has opened our eyes and inspired generations of freedom fighters,' Vice President David Mabuza said Wednesday at the Soweto stadium.

The ex-wife of the first black president of South Africa, Nelson Mendela, died last week at the age of 81. The polarizing politician is a symbol of the struggle against apartheid, whose life was also characterized by criminal complications and scandals. Her state funeral is Saturday.