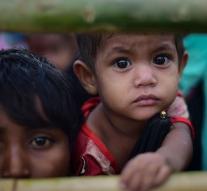 myanmar - Huge groups of Rohingya Muslims continue to fly to Bangladesh. Reporters from Reuters Press Office saw how thousands of people crossed the border from Myanmar on Monday.

More than half a million Rohingya from the Myanmar state of Rakhine has been looking for a safe haven in the neighboring country since the end of August. Several refugees told Monday how groups of Buddhists carry out attacks on people who approach the border.

The search for security has a fatal outcome for some Rohingya. For example, Monday saw a boat with dozens of passengers. The police spoke about at least twelve deaths, including ten children. 'We came here to save our lives,' said a thirty-year-old survivor, who said that several family members were drowned.

The refugee stream came about after attacks of Rohingya insurgents on security forces in Myanmar. They hit it hard back. 'My half-town was burned. I watched while they did it, 'said a 46-year-old refugee Monday.