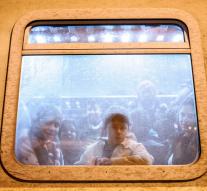 ljubljana - Thousands of refugees have arrived in Slovenia after Hungary joined in the night from Friday to Saturday to the border with Croatia. Around 2700 people came on Saturday . More refugees are expected. That the BBC reported Sunday . Many migrants try through Slovenia continued to travel through Europe , often with Austria and Germany as the intended final destination .

According to a spokeswoman for the UN refugee agency , UNHCR, most refugees are from Syria , Iraq and Afghanistan .

Prime Minister Miro Cerar showed Saturday that the army is deployed to assist the police in border controls. He reported that " Slovenia accepts refugees as long as Austria and Germany keep open their borders . " Hungary decided to close the border with Croatia since the country according to leaders of the European Union fail to arrive at a plan that asylum-seekers must stop .

In September, Hungary closed its border with Serbia already, another transit route to Western Europe. Via Slovenia, which is part of the Schengen countries, the refugees in accordance with the rules free traffic to neighboring countries such as Austria.