Home / World / Thousands of people without electricity through Florence 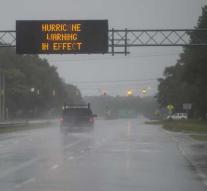 columbia - Certainly 88,000 households in the American state of North Carolina are without power because of Hurricane Florence. The hurricane has not yet landed, which probably happens Friday morning.

Large parts of North and South Carolina already have to do with foothills of Florence. In the coastal areas many streets have been flooded by heavy rainfall and because the rising water in the sea causes rivers to flood. The water only rises further, as the hurricane comes closer.

A few hours before Florence lands, the hurricane has weakened to category 1. The National Hurricane Center (NHC) of the United States, however, says that it will not be less dangerous. The floods and rainfall will not decrease as the wind force decreases, says the NHC.

About ten million people are still in dangerous territory, 'If you're not gone yet, do it now, it's your last chance,' Roy Cooper, the governor of North Carolina, warned. 'You not only endanger your own life, but also that of aid workers who have to save you. '

In North Carolina there is as much rain between Friday and Saturday as normal in eight months, about a meter. The hurricane is expected to move slowly over North and South Carolina and leave the states only on Sunday. At that moment the wind force has already decreased considerably. In the weekend it will still be a lot of rain in the affected states.