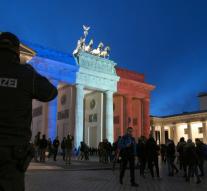 - Thousands of people have stood Saturday at the Brandenburg Gate in Berlin at the deadly attacks in Paris. There is a sea of ​​flowers and candles laid down by people for the French Embassy on Pariser Platz.

The Brandenburg Gate is illuminated in the French tricolor, reported the newspaper Berliner Morgenpost. Chancellor Angela Merkel, other cabinet members and Mayor Michael Müller signed a condolence book at the embassy of France.