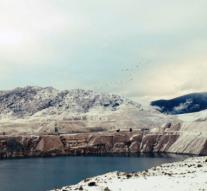 helena - Thousands of snow geese have died after they had landed on the heavily toxic water from a flooded mine quarry in the US state of Montana. The animals were accidentally on that area ended when they were forced to land by a heavy snowstorm.

The flooded quarry is the only open water in the remote area. However, the water is heavily polluted by metals. Personnel mine owner Montana Resources has bright lights, noise and other agents tried to chase the geese and other countries to keep out the water.

The flooded quarry contains an estimated 175 billion liters of water.