Home / World / Thousands of domain names away to trafficking 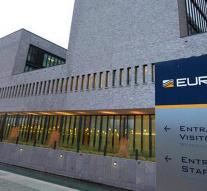 - More than 4,500 domain names are taken off the air because they were used for trade in counterfeit products. These include luxury goods, sports clothes, spare parts, electronics and medicine. The police operation was carried out in 27 countries, including the Netherlands, Belgium, Great Britain and the United States. Of arrests is unknown.

The number of URLs is much higher than last year. According to the European Police Office, Europol is because of good cooperation between authorities and industry.