Home / World / Thousands of Croats are still getting passports quickly 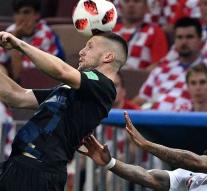 zagreb - In the last 24 hours before the start of the final of the World Cup, 4600 Croatians from the government quickly received a passport or other valid travel document. That makes it possible for them to travel to Russia to attend the competition.

The mother of Ante Rebic, striker of the Croatian team, was one of them, several Croatian media reported in the run-up to the final. Ten charter planes bring Croatian fans to Moscow on Sunday for the game.

Neighboring country Slovenia made extra cars available to the Croatian railways to take the fans to Zagreb. Over 50,000 football fans are expected in the Jelacic Square. The World Cup final between France and Croatia will be played in Moscow on Sunday at 17.00 hours.