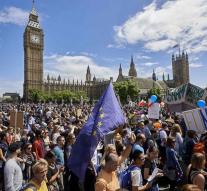 london - Thousands of demonstrators Saturday in central London demonstrated against the outcome of the referendum on leaving the European-Union.

Especially young people, mostly dressed in European flags for the occasion, came down on the massive protest march. They carried signs with phrases such as 'I'm with the EU' and 'Wrexit'. There are no official figures on the number of participants but estimates range from 20 000 to 40 000 people. One organizer even speaks of 50. 000 demonstrators.


The march moved from Hyde Park, passing 10 Downing Street to parliament in Westminster. At the office of Prime Minister Cameron were cries of 'shame on you!' Called.

Many participants say they are surprised by the outcome of the referendum. 'I was genuinely surprised,' said the 25-year-old Nathaniel Samson from Hertfordshire. 'I'm very worried about the future. With this march, I would like to express my displeasure. I accept the outcome, but this we show that not doing silently. '


In the capital London voted 60 percent against the Brexit. Especially young people wanted to stay in the European Union. A majority of 51.9 percent voted eventually for a room.