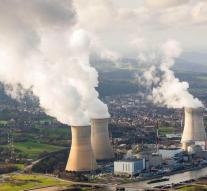 aachen - About four thousand people demonstrated Sunday in Aachen for the closure of the nuclear power plant in the Belgian Tihange. With yellow umbrellas bearing the nuclear logo, the demonstrators made it clear that shelter is impossible for them if it ever goes wrong in Tihange that not only is near Aachen, but also only 40 kilometers from Maastricht.

The demonstration was organized by the Greens. Opponents of nuclear power are very concerned about defects, cracks in one of the reactors and various incidents, including a fire in a non-nuclear part of the plant. The Belgian government wants to keep open but central for years, until the country to renounce nuclear energy by 2025.

Research showed last year that the cracks in Tihange 2 are not bigger. Concerned experts considered that the plant is safe, but the region is certainly not assured. The Maastricht and Aachen hope to enforce through the Belgian court closure.