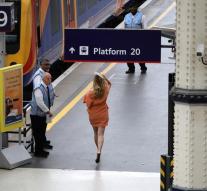 london - Tens of thousands of commuters are stranded on their way to work in central London on Monday morning. The busiest railway station of the British capital, London Waterloo, was unavailable due to a technical malfunction.

The responsible transport company South West Trains informed that the malfunction would confuse train traffic throughout the morning. There was only one advice: travel to London Waterloo before the end of the morning pressure.