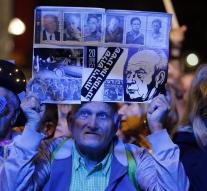 - Tens of thousands of people in Israel Saturday commemorated the assassination of Prime Minister Yitzhak Rabin. They came together at the square in Tel Aviv where Rabin was gunned down twenty years ago.

Former US President Bill Clinton gave a speech during the memorial. He and Rabin worked in the nineties closely together to resolve the problems between Israel and Palestine. Clinton stressed Saturday that the Israelis and Palestinians need to put the stalled peace process, despite the re- escalation of violence between the two parties.

Rabin was assassinated in 1995 by Jewish extremist Yigal Amir. Which was strongly opposed Rabin 's plan to give land to the Palestinians in exchange for peace. He shot the prime minister dead after a massive peace rally in Tel Aviv. Amir was sentenced to life for the murder.

Rabin received for his efforts to achieve peace in 1994 the Nobel Peace Prize.